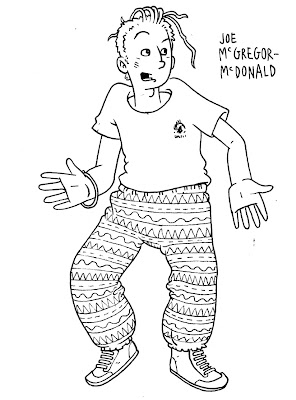 When I started high school in 1994 I didn't know anyone in my class, but thankfully most of the guys were in the same boat. Natural groups began to form - Karori boys, guys from the Hutt, librarian types - and I fell in with a group of guys who caught the Paraparaumu line train and a few other dudes who kind of didn't really fit in anywhere else.

In a world of scared, introverted 13 year old boys in grey uniforms its hard to get much of a sense of anyone's actual personality. The first time our little gang ever had a chance to hang out together outside of school was going to be Lucien's birthday party and man, we were excited. Joe McGregor-McDonald told me he had the coolest pants ever. I didn't know what to wear.

I wore what everyone wore: sneakers, straight blue jeans and my coolest streetwear-brand-name t-shirt. Everyone except for Joe. He rocked in wearing baggy bright purple hammer-style pants with African patterns all over. He said: "They're called Zimbobaloobas".