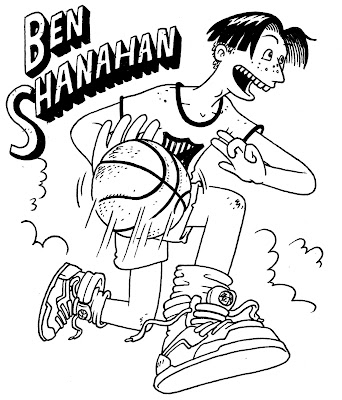 I lived in Canberra, Australia from the age of 9 until the time I turned 11. Ben Shanahan was my best friend.

He was the coolest guy in all of Campbell. We met through sports I guess - doing Mal Meniga kicks in the park behind both of our houses. He was the funniest guy around and knew everything about everything. He got me my first job selling newspapers and magazines outside office buildings in the mornings before school.

He was also a passionate and skillful sportsman - league, cricket, AFL, athletics. Basketball was the ultimate at our school though, and Ben and I were the most feared one-two combo around. Ben at point guard, me in the paint throwing elbows, shouting "Stockton to Malone" every time our deadly teamwork cut our opponents to shreds.

It was really hard to say goodbye to him. I remember being in the car, him outside the window saying he didn't want to say good bye and he wanted to leave me with a joke. He walks off, gathers himself, starts strolling over. "A man walks into a bar", he says, being all cool. "Dong."