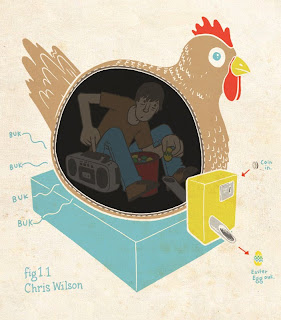 You're in a department store at easter. You see a giant plastic chicken. You put a dollar coin in the slot, the chicken clucks and an easter egg comes out the slot. That's a machine right? No, it's my friend Chris Wilson. Well, for one easter at least.

He got the job through student job search and spent a week hunched over inside the chicken in the dark losing his mind. He had to stay in a constant of readiness - his only cue was the faint sound of a coin dropping into the box. If and when he heard a coin he'd press play on a ghettoblaster playing a cassette of chicken noises, let it run a few clucks, press pause and push an easter egg down the tube between his feet. He told me he was in constant state of stress too - he was always paranoid that the tape would be at the end and the chicken would would stop mid cluck. So I guess he was taking care in his work.

I'd love to know how this has affected Chris in the long term. Do you think he has nightmares about chicken noises in the dark?