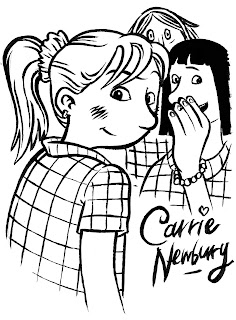 It was true romance. Two of Carrie's mates crossed the playground one lunchtime and told me and my mates that Carrie wanted to know if I would be her boyfriend. I talked it over with the boys but there wasn't much to think about - Carrie was one of the prettiest and most popular girls in the school - so at the end of lunch I sent two of the guys back over to say yes.

We didn't really speak to each other much but everyone knew for the rest of that year that we were a couple. I drew a little 'TM 4 CN' on the bus shelter where she sat everyday after school, and at the end of the year when I had to move back to New Zealand I bought her a bone carving shaped like a dolphin. I felt pretty smooth for a 10 year old.