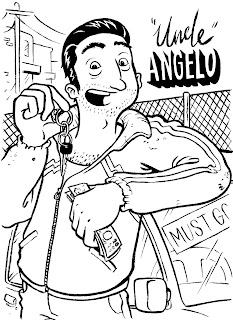 In 2004 Batrider had a problem. We were playing a lot of gigs, which meant a lot of transporting gear, but we had no wheels. Across town, second-hand car dealer Angelo had a different problem. By night his car yard was locked up and all those cars were just sitting there not making him any money.

We got to know Angelo well. We'd rent whatever rust bucket old van or station wagon he had in the yard (for a while it was a red Postman Pat postal van), sometimes just overnight, sometimes for a a weekend. He never saw our licences, we never signed anything, we just flicked him some cash and he flicked us the keys. If we bought the cars back after the yard was closed we'd park them in the street and throw the keys back over the fence. We slowly became friends - He lent us nicer cars when our parents came to stay so we could look flash and he once even picked us up from the airport after we'd been away on tour.