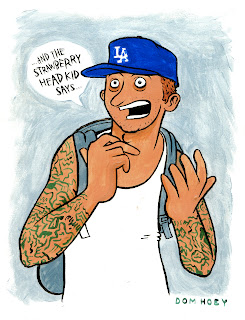 When you draw comics you get a lot of suggestions. Perfectly well-meaning people don't get that you're busy, or their idea sucks, or that you actually enjoy coming up with your own ideas, thanks. Everybody busts out the odd 'Hey I had this idea for a comic' and that's all fine but there are some people who just won't leave it alone. Every time you see them they're already at 'hey you should draw..' before you've even said hi.

Dom was one of those guys, but in a good way. I met him when he was drumming for the Wellington hardcore band Pedal Faster, before he moved back into auckland and became MC Tourettes. We met a few times at parties or after shows, and it wasn't long before he became a top-of-the-line comics-suggestion guy. Dom was one dude who I loved to hear ramble. His ideas were either downright amazing or at the least entertaining, and there was plenty of them. I really wish I could remember them better, we were usually both drunk.

I remember one great story about a gang of kids with different pieces of fruit for heads. It was sharp, funny and well told. Could've been a classic by now.