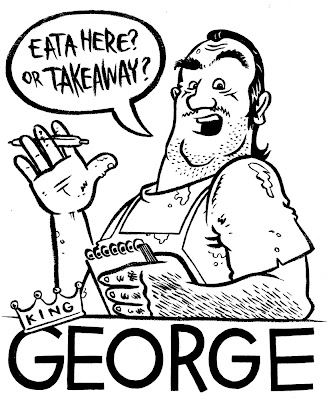 You could usually hear George before you saw him. He was a larger (and louder) than life Greek who ran a tiny but excellent fish'n'chippie at the Campbell shops. His standard opening joke was "eat here or takeaway?" which you knew was a joke not only because his shop was so small it had no tables or chairs, but also because he'd start laughing like a manic pirate captain straight afterwards.

The Campbell shops were just down the road from the Duntroon military base so there were always a lot of soldiers in there getting a lazy dinner. Years back the Queen was due to inspect the troops there in a full formal parade, but the soldiers had asked George to stand in her place for the dress rehearshal, and this is where George earned his crown. All over the walls of his shop were photos of him in front of hundreds of troops at full attention all saluting to him. The King. 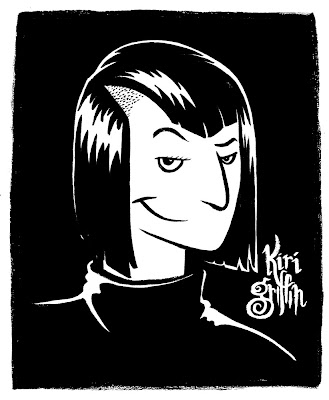 Conversation with Kiri is a multifaceted array of ingenious jests with a smattering of curious facts. One's initial impression is of astonishment at the breadth of her maglinoquent vocabulary, which soon ripens into wonderment at the way in which said parlance is enunciated in an eminently articulate and manifestly mellifluous manner.

Plus she is funny. 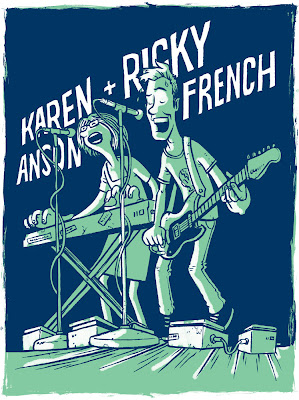 Originally Actor Slash Model was Karen, Ricky and a drum machine and they were great - insanely catchy pop with weird freak-out bits. After a while they recruited my good friend Phil Smiley on drums and I think his role was just as much about having a third person in the room keeping things sane as it was about drumming better than a machine.

Through Phil I got to know them both well and we became good friends. Some of my favourite Melbourne memories involve afternoon BBQs in Karen and Ricky's backyard - sun shining, bands playing, beers flowing.